November 29, 2013 0 Comments https://runnersconnect.net/ Runners spend a lot of time worrying about the shoes that they w...">Share

Runners spend a lot of time worrying about the shoes that they wear for their workouts and races.  They’ll try on a dozen different trainers at a running shoe store, searching for the perfect shoe that will keep them running healthy.  But often, they don’t pay much attention to their casual shoes or their work shoes—the ones they’re wearing for the 14 or so waking hours a day that they aren’t running.

But these shoes can be just as important as the ones you run in, and a poorly-fitting or restrictive shoe that you wear for work or for fashion can cause plenty of problems with your running, even if you’re in a great running shoe when you train. 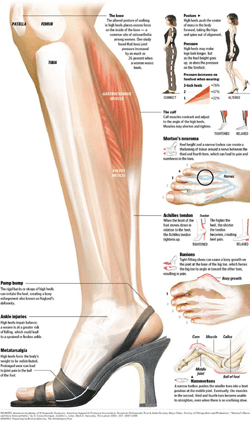 Some of the worst offenders when it comes to unhealthy casual footwear are women’s fashion shoes, with high heels being the most well-known troublemaker.

High heels have a well-established history of being harmful to your feet, as described in a 1994 scientific review article by Francesca Thompson and Michael Coughlin.

According to Thomson and Coughlin, as a shoe’s heel becomes higher, pressure increases dramatically on the forefoot as your weight is shifted forward from your heel to the ball of your foot.  This effect is particularly strong when heel height is over two inches, as it often is in many fashionable boots and high heels.

Narrow, pointed toe boxes are another problem with many casual shoes.  Compounded by the fact that many narrow-toed shoes also have very high heels, which only put more pressure on the forefoot, your toes end up being crammed together, likely increasing your risk of developing several foot injuries that can affect your running.

Too small, too risky

Thomson and Coughlin cite studies showing a significant increase in the prevalence of bunions, hammertoes, and neuromas in women (who are vastly more likely to wear high-heeled, narrow-toed shoes), but not men, after the age of 20.  Their opinion is corroborated by that of Carol Frey and Neil Roberts, two doctors who authored a 2002 article on the foot injuries associated with poorly-fitted fashion shoes.

Frey and Roberts describe a survey of 356 women between 20 and 60 years old which found that 80 percent reported substantial foot pain while wearing their shoes, and that a full three-quarters had some type of foot deformity, like a bunion, neuroma, or hammertoe.

Tellingly, almost 90 percent of the women in the survey who suffered foot pain wore shoes that were too small for their feet.

The women as whole wore, on average, a shoe that was half an inch too narrow for their foot, while the small percentage of women who did not suffer from foot pain or foot deformities wore shoes that were closer to the actual size of their foot—less than a quarter-inch of a difference.

While women’s shoes are infamous for having absurdly high heels and impossibly narrow toe boxes, men aren’t immune from problems caused by poorly-fitted casual or dress shoes either.

Many men’s dress shoes feature the same kind of unrealistic pointed-toe shape that’s found on women’s flats and high heels, and the traditional hard sole that can be found on leather shoes is very unforgiving when it comes to support.

A very clever 1995 study examined forces in the hip joint with a variety of shoes directly through an implanted force measurement device.  One intrepid elderly man who was scheduled to undergo a hip replacement volunteered to have a force transducer implanted into his artificial hip, allowing biomechanical researchers to examine how wearing different shoes affected the forces inside his body. Though most types of shoes, including running shoes, hiking boots, and clogs, didn’t function much differently…

Hard leather Men’s dress shoes resulted in a marked increase in force at the hip (and presumably everywhere else in the leg) when the subject was walking.

And given that softer surfaces underfoot can reduce the peak levels of pressure on the bottom of your foot, we should expect that wearing a hard leather dress shoe would result in increased localized pressure and pain in your feet.

A few steps for achieving comfort

When it comes to the types of shoes you wear in your daily life, you don’t always have complete freedom.

If you do have the ability to wear whatever shoes you like, try to spend most of your time wearing comfortable, supportive shoes.

The best testament on what to wear probably comes from people who spend a lot of time on their feet: next time you’re at the doctor’s office, check what the nurses (who spend hours on their feet every day) usually wear—more often than not, it’s a running shoe or a cushioned, supportive sandal like Crocs.

Comfortable casual and work shoes may not be the most stylish, but they will do a good job of keeping your feet comfortable!