Most biomechanics and physiology researchers focus their efforts on big topics like injury, performance, and health. These research papers are usually centered on fundamental issues like impact, pronation, and oxygen consumption.

But, fortunately for us, a few researchers take the time to investigate some of the lesser but still important topics.

For example, a while back, we looked at some scientific studies on chafing and blistering in runners—a nontrivial topic for many of us!

Today, we’ll look at another of those “little details”: how should you lace your running shoes? 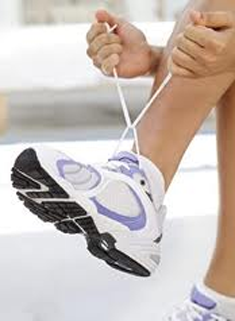 The science of how you should lace your shoes

One particular research group, headed by Marco Hagen at the University of Duisberg in Germany, has published several papers on just that question. The first of these papers, published in 2008, looked at the biomechanics of twenty distance runners moving at 8:00 mile pace on a treadmill under a variety of different lacing conditions. Data on impact force, pronation, and the pressure under the sole of the foot were collected.

All runners wore the same shoe, a Nike Air Pegasus, but laced several different ways. As do most running shoes, the Pegasus has six eyelets on each side, plus a seventh at the top which is slightly offset from the rest. The first three lacing conditions involved tying the shoes (with the normal 6-eyelet cross lacing) with different tightnesses, “weak,” “normal,” and “tight,” as perceived by the subjects in the study. After that, the researchers tested some additional lacing patterns, including an incredibly lose two-eyelet lacing (using only the first and second eyelets, a three-eyelet lacing (using the first, third, and fifth), and a seven-eyelet lacing using a “heel lock” loop on the final shoe eyelet, as depicted below. 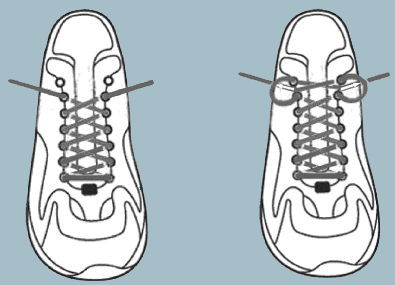 A tight lacing also reduced localized pressure on the outside of the foot, likely by pulling the heel deeper into the shoe’s insole. However, there was a downside—the runners consistently reported the tight-laced condition as being one of the least comfortable. However, Hagen et al. found that the seven-eyelet “heel lock” lacing at a normal tightness was just as effective at reducing impact loading rates, pronation velocity, and plantar foot pressure as the standard six-eyelet lacing tied tightly.

In a later study, Hagen and his colleagues conducted a similar experiment, however, this time they added a measurement of the pressure on the top of the foot. This is an important step forward, as increasing the tightness of your laces increases pressure over the top of the foot, including the navicular bone and the extensor tendons that cross the ankle. While these areas are not injured very often, injuries to the navicular and extensor tendons can be very bothersome.

Using a similar experimental procedure, Hagen et al. tested fourteen male runners using only the normal six-eyelet lacing, the seven-eyelet heel lock, and a variant of the heel lock in which the sixth eyelet is skipped. The results showed that the two lacings that utilize the seventh eyelet result in lower pressures on the top of the foot without sacrificing any significant amount of stability in the foot’s contact with the insole of the shoe.

The special heel lock which skips the sixth eyelet (pictured below) was particularly effective at reducing pressure on the top of the foot. 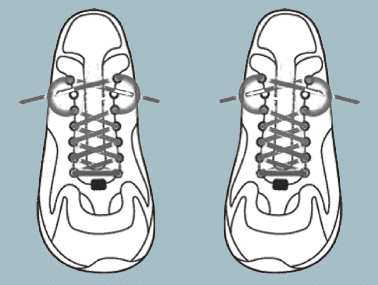 One lacing style I was disappointed that Hagen did not investigate is “ladder lacing” (sometimes called “Lydiard lacing” after Arthur Lydiard, who advocated its use in some of his books in the ‘60s and ‘70s). 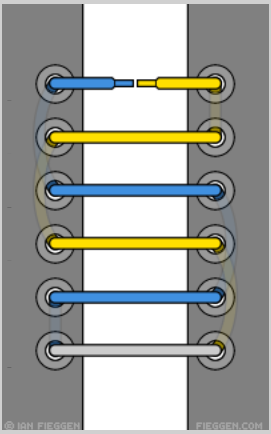 Additionally, many shoes today come with straps instead of eyelet holes. It’s unclear whether these provide any additional stability or advantages compared with regular eyelets. As always, there’s more research to be done!